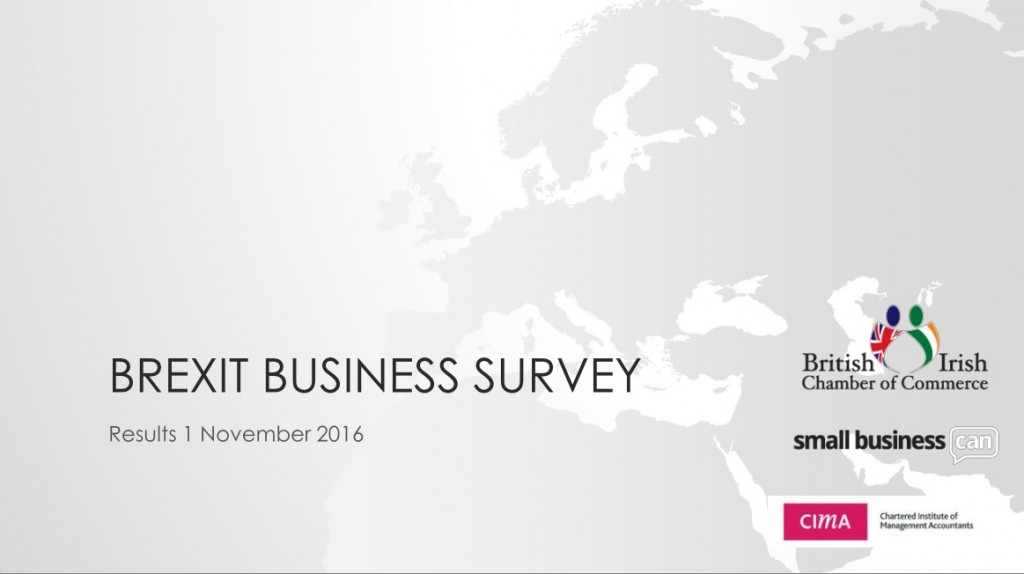 Wednesday, 2 November 2016 – “Clarity of Brexit Terms” and “Unbiased Information” are the two supports that businesses want most ahead of the upcoming Brexit negotiations. In a survey conducted by the British Irish Chamber of Commerce in conjunction with the Chartered Institute of Management Accountants (CIMA) and Small Business Can, 73% of those surveyed said they needed clarity of Brexit terms in order to deal with the effects of Brexit. 63% said they were in need of unbiased information.

Noting the survey’s findings, John McGrane, Director General of the British Irish Chamber of Commerce, said: “While providing clarity around the Brexit terms rests very much in the hands of the UK Government, the Irish Government can play its part by providing businesses with the information they need in order to prepare themselves for the UK’s departure from the EU”.

The British Irish Chamber of Commerce’s survey was conducted over a twelve day period in the lead up to the Government’s All-Island Civic Dialogue.  256 firms were surveyed on a range of issues including what preparations they are taking ahead of Brexit and what supports they feel they need in order to protect their business. The survey builds on the Chamber’s previous Brexit survey that was conducted in July.

The steps being taken by businesses to prepare themselves for Brexit include:

On the supports needed by businesses ahead of Brexit, McGrane noted that some industries are showing more vulnerability than others. He said “It is clear from our research that some industries are more exposed than others in this initial phase after the referendum. For instance, we are seeing a large number of companies in the Food and Agriculture, ICT, Manufacturing and Pharmaceutical sectors calling for currency stability support. Meanwhile securing NI trade ranks more highly with those in the Energy and Food and Agriculture sectors.”

The survey highlights that while business will welcome support from Government and trade organisations, at this stage it is mainly looking for clarity and timely, impartial information. Positivity and Calmness is also seen as highly important, while currency stability support and securing NI Trade are also seen as priorities on the list of potentially valuable supports according to the survey.

A summary on the main findings of the survey results is available at here.

About the British Irish Chamber of Commerce

The British Irish Chamber of Commerce is a private sector trade organisation, founded in 2011 to represent businesses and employers with interests in the two islands of Great Britain and Ireland. The Chamber’s mission is to highlight, protect and grow the trade between Ireland, Northern Ireland, Scotland, Wales and England. That trade is worth €1.2 billion a week or €60 billion a year and it supports 400,000 jobs, about evenly between the two islands.